The most iconic African wildlife are certainly the Big 5. If you’re heading on your first wildlife safari, you’re probably hoping to check these sightings off your bucket list. But what exactly does “Big 5” mean? They aren’t necessarily Africa’s largest animals or the most famous. The term “Big 5” is actually taken from hunting terminology—they’re the most dangerous African game to meet on foot.

These incredible animals are certainly impressive to see in the wild. Words truly can’t describe the adrenaline, mystery, wonder, and connection with nature that comes with seeing African wildlife up close in its natural habitat. When you’re on safari, you may be staying in luxurious accommodations, but you can’t forget that you’re entering nature’s domain. This is truly a wild world.

Meet the stars of African wildlife: the Big 5. See if you can spot these magnificent creatures in the wild on safari!

Lion waking up for his evening hunt. Image courtesy of Laura Tober

Lions are the most social of the all the big cats. They live together in groups called “prides” consisting of about 15 lions at a time. Male lions defend the pride’s territory and female lions (lionesses) do the hunting. Lions can run for short bursts at 50 miles an hour, but they don’t have the stamina to keep that pace for long distances.

Their roars can be heard from as far as 5 miles away! Depending on your style of safari camp, you may hear them roaring at night. It’s certainly an unforgettable feeling! Though they are fierce predators, lions know what it means to enjoy a lazy day in the shade, as they may sleep up to 20 hours a day. Today, lions face obstacles such as habitat loss and poachers. 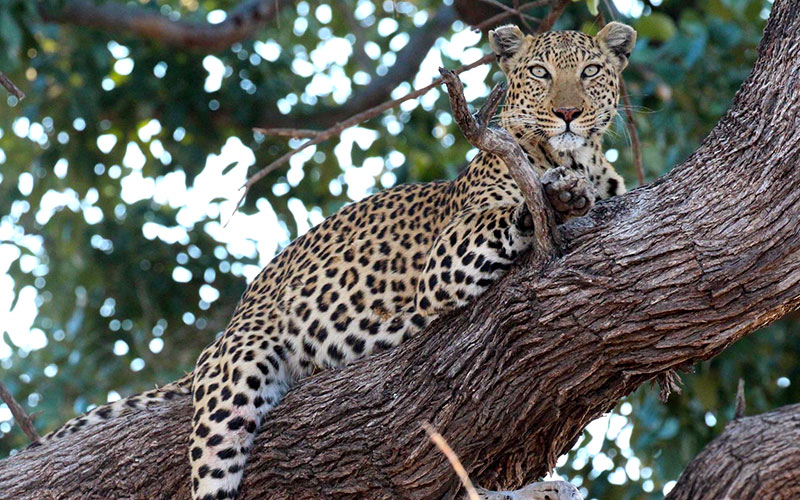 Leopard in a tree in the Okavango Delta, Botswana. Image courtesy of Ellen Hoffman

Leopards are renowned for their agility and strength. They can run up to 36 miles per hour and keep that pace for long periods (unlike their cousin, the lion). They can leap up to 19 feet horizontally and 10 feet vertically. Pound for pound, leopards are the strongest of the big cats. They’re able to climb trees, even when carrying heavy prey, and often choose to rest on tree branches during the day. They often keep their prey up in the trees to ensure scavengers like hyenas, or even lions, won’t steal their meal.

Leopards also purr when they’re happy and growl when they’re mad, kind of like a pet cat—but much, much bigger! They have various vocalizations, like a rasping cough, for example. They will make this noise to announce their arrival to other leopards. Unlike lions, they are not social creatures and prefer a solitary lifestyle. Due to poaching and loss of habitat, leopards are an endangered species. 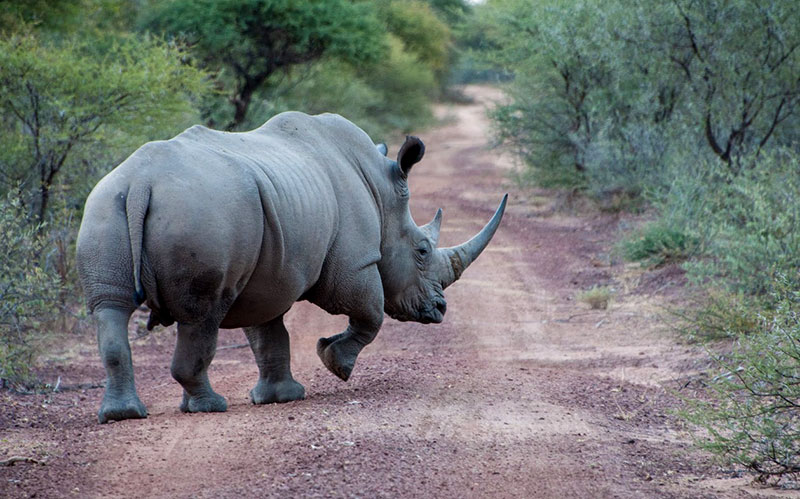 There are actually 2 types of rhinos you can find in Africa: the black rhino and white rhino. You can tell them apart by the shape of their mouths. White rhinos have a square-shaped upper lip that’s perfect for grazing, while black rhinos have a more pointed lip designed to pick fruit off of trees. Black rhinos have a sort of “attack first, ask questions later” attitude. When they catch a human scent or anything unfamiliar, they’re likely to charge. Mix that with their bad eyesight, and sometimes they’ll charge a tree or a rock. However, they do have a great sense of hearing and smell.

While both types of rhinos are a target for poachers, the black rhino is considered critically endangered. Recent success in conservation brings hope for the species, but there’s still a long way to go. Humans are the biggest threat to adult black rhinos. In several Asian cultures, people believe rhino horn provides powerful medicine for a variety of ailments; these horns bring poachers high profits. Learn more about rhinos and how you can help preserve the species. 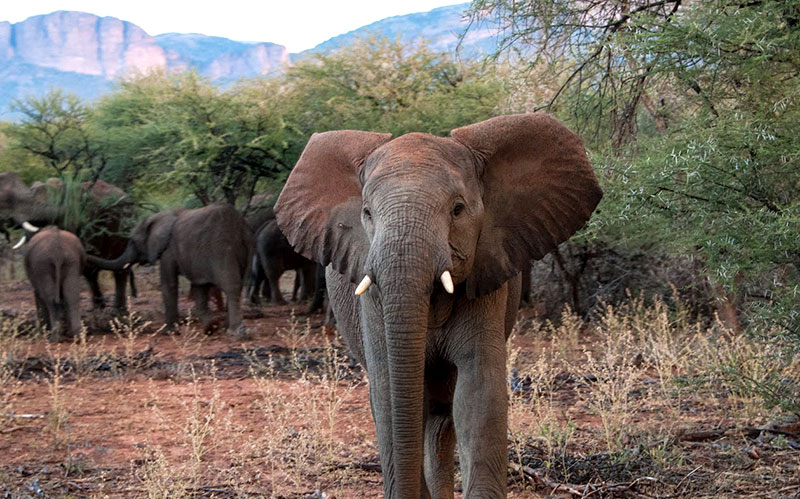 The African elephant is the largest animal walking the earth. Their herds wander through 37 countries in Africa, so you are likely to see them on safari in southern or eastern Africa. African elephants are family-oriented animals with a complex social structure. There are 2 types of herds: family herds led by a matriarch, and herds of bachelor males. Lone males may also travel by themselves.

Elephants play an important part in their ecosystem, dramatically affecting the landscape. As they march through the bush, they create clearings that boost tree regrowth and make it possible for smaller grazers to reach new patches of food. At many safari camps, you can see them drinking at a nearby waterhole, or even walking right outside your window! Read about some of our favorite ethical elephant interactions in Africa. 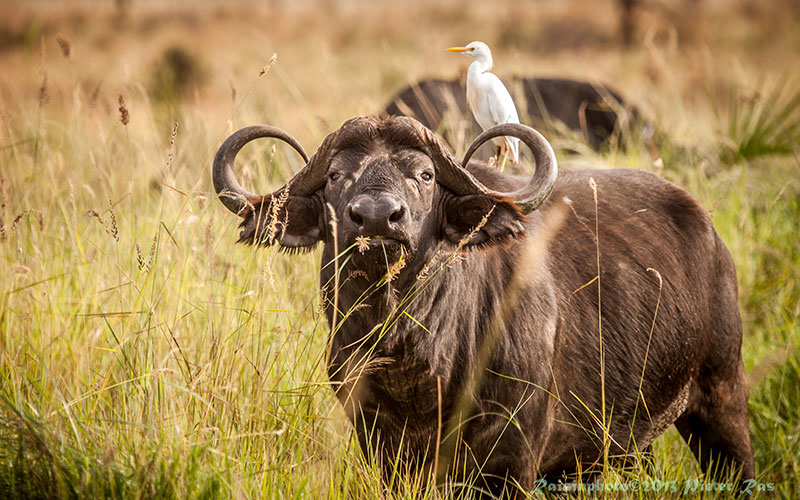 The African buffalo, also known as the Cape buffalo, is thriving, and you’re likely to see this species all over southern and eastern Africa. These guys are big and they know how to handle themselves. Their horns are used to protect themselves and to take on any other buffalo that tries to battle them. They also have amazing memories and have been known to ambush hunters that have wounded or injured them in the past. Cape buffalo have also been known to kill lions.

Ready to see the Big 5 and more African wildlife up close? Check out our list of the 5 best safaris in Africa for inspiration, or contact us online to start planning your handcrafted safari adventure! 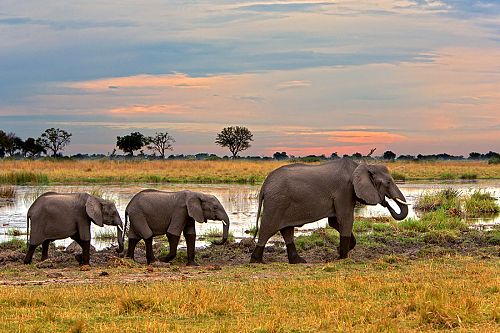 In the age of a global pandemic, it may not feel like the right time to be planning travel. We understand you may have had to put current and upcoming travel plans on hold – we definitely have. And with quarantine measures in place, we know we are all craving for the time when we Read More…